I have amazing friends, so when six of them decided to up and get married within two weeks, I knew I was in for a fabulous—and exhausting—late summer. Each wedding was unique, and each surprised me with creative little details to make the day extra special. Here are my highlights:

First and foremost, the best thing about this wedding was Alanna’s dress. A classy lady, Alanna is often clad in black or comfy cardigans that keep her style effortless and classic. But for her wedding, Alanna did not bow down to the princess dress. Oh no, she went straight to Etsy where she found this gorgeous number from Armour sans Anguish (see more here). 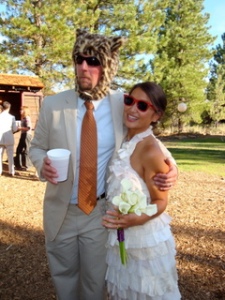 Their wedding also rocked due to the game set-up of darts and cornhole, the fire pit with s’mores, the “That’s What She Said” sign at the bar and the homemade cherry-filled chocolate cupcakes that Zan and I baked the day before. Stay tuned for the launch of our baking company…

Anya is a graphic designer and all-around über stylish person, so I knew that her wedding would be an affair to remember. Before going in for the big day, I knew a few things: A) there was to be a carnival theme, with handmade triangle carnival flags B) brass animals would act as center pieces C) the bridesmaids would carry giant balloons down the aisle, then Anya would carry the bunch out with her.

Those details alone was enough to send my heart aflutter, and to see them all in action was a treat. Plus, the bridesmaids wore pencil skirts with ruffled silk shirts, a nice contrast to the ubiquitous solid-colored bridesmaid dress.

Tall sun-kissed grasses provided the perfect backdrop for the vows. Here’s a nice shot of the crew headed down the hill from the ceremony.

The brass animal center pieces got a little thirsty and found an oasis of Stella Artois. (We got a little carried away with arranging them… this is but one of many poses.) 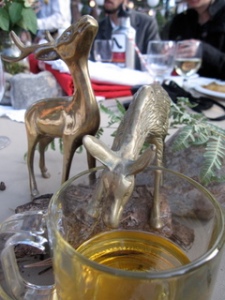 The man behind the music, pro snowboarder Eric Messier, was easily the best DJ I’ve ever stomped a foot to. The dance floor could barely fit us all, and no one left until the bitter end. Don’t think weddings are a typical gig for him, but they should be.

Easy breezy might be the best description for these two love birds. They emanate an effortless joy, and their wedding was sweet and simple. At Tahoe Park Beach on the West Shore of Lake Tahoe, the setting couldn’t have been better. Their minister/friend Kels was hysterical, and had us all chanting, on-command, “Livin’ the Dream,” which happens to be the name of his “church.” After the ceremony, he let the bride and groom jet off on his boat for a bit… livin’ the dream.

Music was provided by The Impappropriators (a melting pot of a band consisting of Jenni Charles (fiddle), Kerry Andras (bass, etc) and Kurt Beckering (banjo, etc), all formerly of the Rusty Strings, along with Ryan Salm (harmonica) and Lauren Bobowski (percussion). Because the band members are friends of ours, the whole shebang had that comfortable feeling of a house party.

One of my favorite moments was when Jenna first appeared, walking down the aisle, she said “Hi guys!” in the cutest, most sincere voice. She is rad!

Cat-man strikes again! This time, he was in charge of the pig roast, hence the attire.

And last but not least, games abounded at this wedding, too. Corn hole competition was heated, with Chris and I versus Ryan Salm (the photographer, plus Inappropriators harmonica player) and Hanni (Karl’s sister and bridesmaid extraordinaire). Thanks to Chris’s keen hand-eye coordination, we left the party undefeated that night. There was also impromptu jump roping with some of the lantern string lights… my pictures didn’t do the sport justice, so check out Ryan’s pics here. 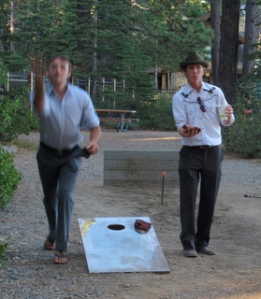