So my first Reno Aces game last Thursday was uh-mazing. Why? One word: Archie. Sure, the new ballpark was great and the game was exciting—especially when the Aces rallied to score 4 in the fourth inning—but the amorphous mascot took the cake.

Maybe I am just a sucker for furry animal-like creatures, but I loved  him, despite the fact that A) I have no idea what sort of creature he is B) his girations and oversized tongue weirded me out. Anywho, here’s a detailed account of the craziness that ensued:

It all began when I saw his first major dance sequence above the home team dugout. He had moves, bumping his belly around to the music, shakin’ his red fur and playing air guitar with his roll-out tongue. We asked a security guard about Archie’s species, “What is it exactly?” His reply: “No one knows.” 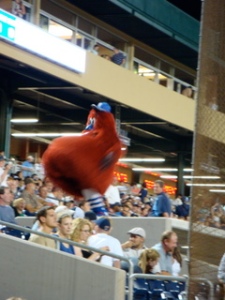 We then ran into Archie up by the Refreshments and stopped for a few photo ops. As you can see, we bonded right away—we even have the same smile and gestures! 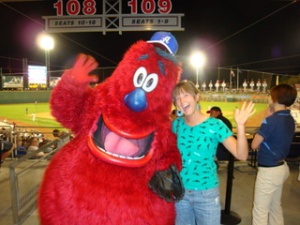 If I wasn’t already smitten, the deal was sealed when the sixth inning rolled around and Archie plopped down in a seat in front of us. A chatterbox, the red guy just kept bringing the hits, one after another in his high-pitched raspy voice.

But it didn’t stop there. Oh no. Another mascot, a UNR Wolfpack member, jumped into the mix. 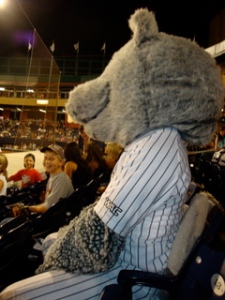 And this guy was serious about one thing: cutting Archie’s hair (don’t ask why). Comb and scissors in hand, the silent wolf began his style session and things got out of control practically on top of my lap. When the scissors fell, I grabbed the opportunity to conjure up my own inner stylist.

But when the next booty-shaking song came on, Archie was gone again, out of our section and up on his dugout stage. And though the Aces didn’t pull through for the win, I think you’ll agree it was an epic night.